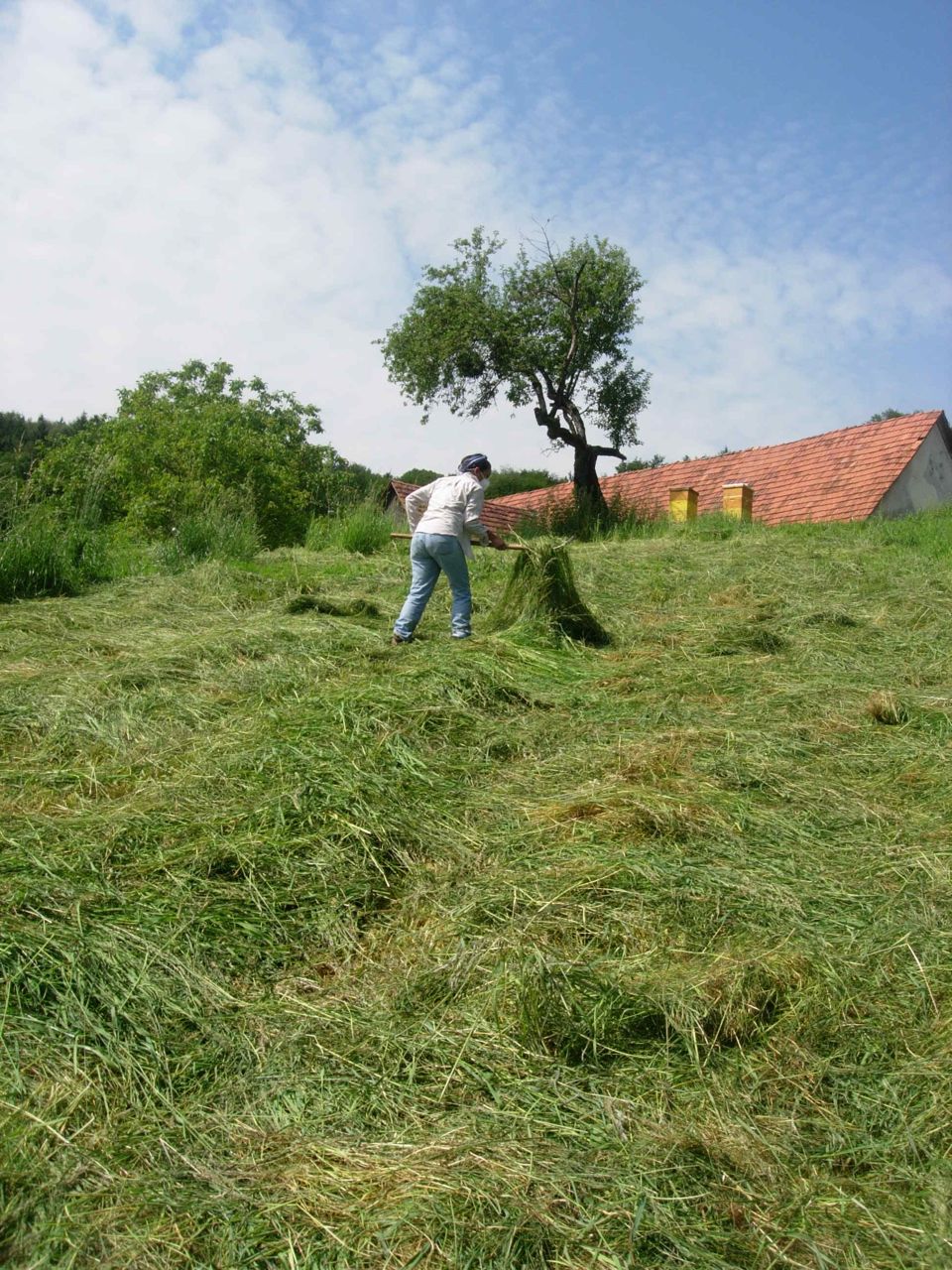 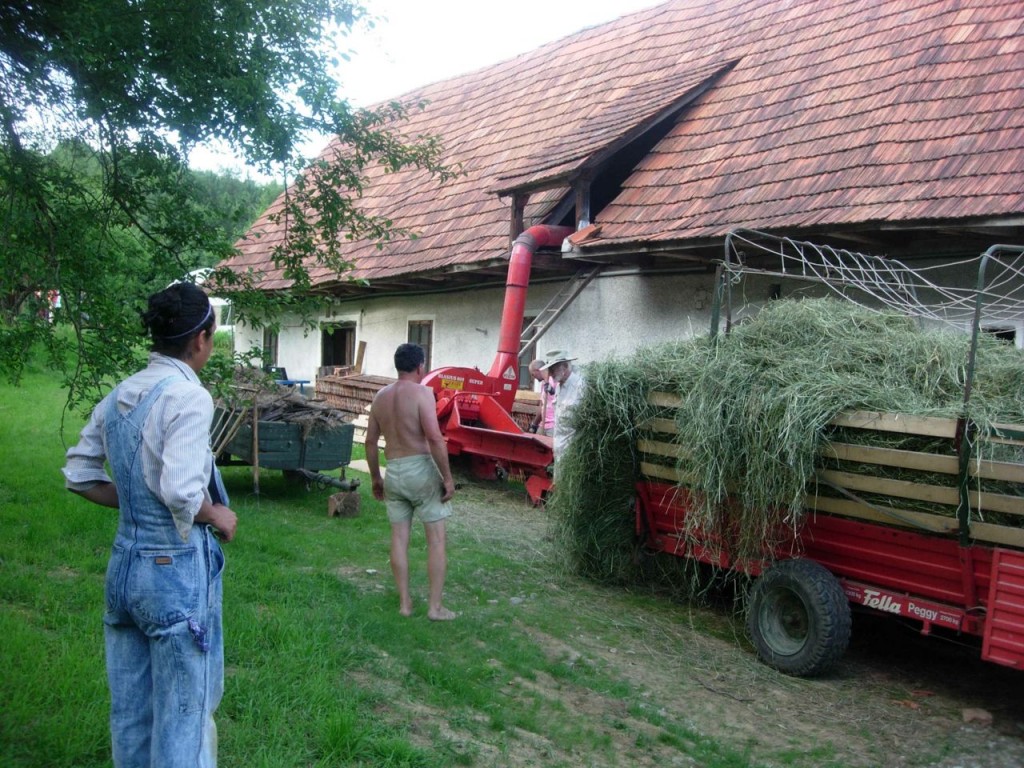 HayDay at KLEINeFARM was quite the trip through time.    So it is around here these days, we are a step behind in everything that we do due to the amount of work we have inherited starting a farm.  Our motto around here is something to the fact that we cant wait for next year because everything will be easier — we hope.  But nonetheless, we love our job and our friends that we have made, and HayDay was one more experience that we have survived.  Here is the story

This was our first time in our life to make hay!  So the grass on about 2 acres was overdue and we were waiting for the next weather forecast that gave us 4 days without rain.  We didnt have any good mechanized equipment except for an old side delivery rake (an implement that picks up the hay, fluffs it up and puts it into rows) and a hay wagon that picks up the hay when it drives over the row and loads it into the wagon.  Both machines were quite old and we didnt know if they worked.  So we decided to do it all by hand:  cutting with a walk behind mower with a sickle blade, turning it by hand several times a day, loading it into the wagon with pitchfoks and then blowing it into our hay loft with this old hay cutter and blower that is in the picture above.   Well, needless to say, our plan started in the 7th century and we ended somewhere in the 20th.

The mowing went well but the problem was that the grass was so high and so thick (due to the fact that we had planted fava beans on that field the year before and the soil was filled with nitrogen which helps plants grow) that it was up to my shoulders at times.  When I was done mowing we started fluffing and turning the hay to allow it to dry.  At times there were 4 of us working on the field turning hay and it took us around 5 hours to turn it once — the old farmers were telling us to turn it twice a day!  So we tried the next days to turn it once and where it was thick we turned it twice because it was wet.  After a few days of turning hay the whole day we were exhausted.  Ulli began to move forward in time.

She called a local machine dealer and asked if we could borrow a tedder, an implement that turns and fluffs the hay to help it dry (what most people use these days) and they agreed.  I drove to town with the tractor and got the tedder.  In 30 minutes I had turned the whole field!  The next day I fixed the row making hay rake implement and the fun began.  The dark clouds began to billow and there we were on the field thinking that after all of this work it is going to rain on our nearly ready hay.  People began showing up from everywhere — the neighbor from below, Josef and Igi and Josefs mother and sister who are well over 70 years of age and who spent their whole life turning hay on the mountains of Tirol, random people driving by etc.  They all grabbed rakes and started helping raking into rows as I was using the machine.  The darkness was growing by the minute and finally it was time to load the wagon.  Well, our tractor was not the right size for this wagon so we couldnt activate the drive train (PTO) that would make the machine pick up the hay itself.  So we were thinking that we had to load all of the hay with pitchforks — thats when our neighbor Franz hopped into his tractor, drove down to some other neighbor, found the right part (a long PTO shaft), connected his monster tractor and began collecting all of the hay.  He dumped three huge wagon full loads by the hay blower and we were blowing as fast as we could.  It still wasnt raining.

The Hay blower, Epple Blasius 800 was a superstar until the men got too carried away and started stuffing it too full with hay that the conveyer belt got stuck and the drive chain busted.  So, we started pitchforking into the lower level of the stall . . .  The Hay was safe, the clouds dissapeared and we drank and were marry into the night.

Well, the story is never over around here because as we knew and as we are learning, Hay is a living thing and even though it seemed dry enough there is still quite a bit of moisture in it so we are monitoring it regularly so it doesnt spoil or spontaneously combust (high consequences for mistakes or laziness around here).  But I think thats it and we learned a lot.  Although doing things the old way seems romantic, it is a lot easier and more efficient to use the machine.  Sorry John Henry!  But we got it done and we couldnt be more grateful for all of those who helped us.  So here it is:

Thanks Mom and Dad for watching the kids, ulli for working way too hard as usual, Ileana for teaching us “Hay, Just BEE”, Tobi, Barbara the clown, Hildegard (our guardian angel), Igi, Mountain man Josef, that man yelling at me to turn the hay while driving backwards, Franz with the big tractor, the rain goddess, and Herr Frolich for his advice.  I have learned so much from all of you and I can promise it wont be so hard next time . . .

7 comments on “HayDay at KLEINeFARM”