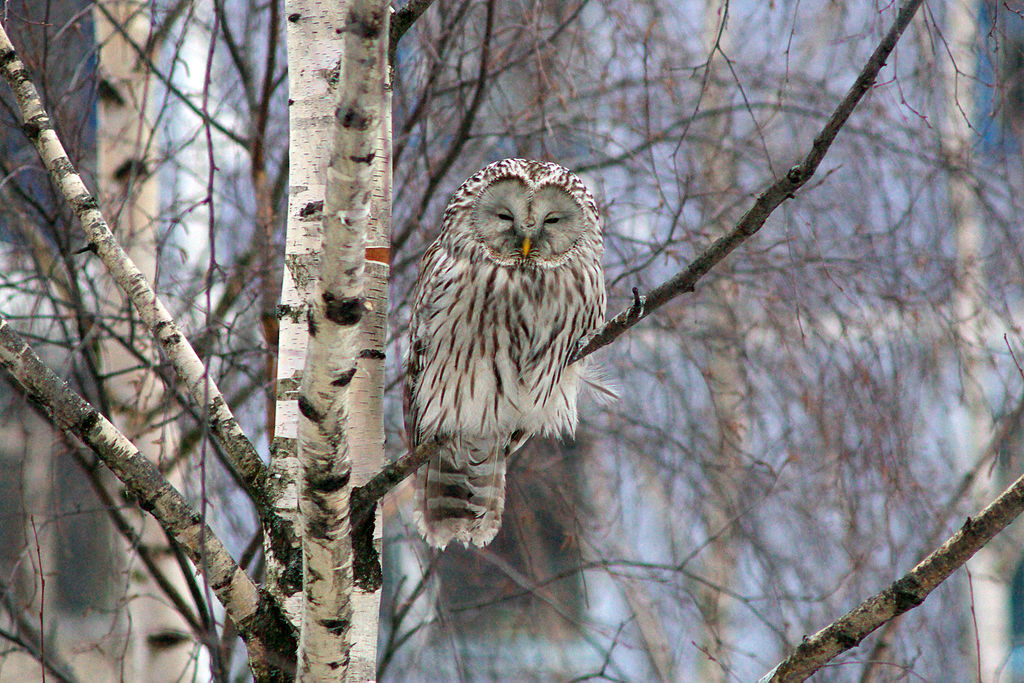 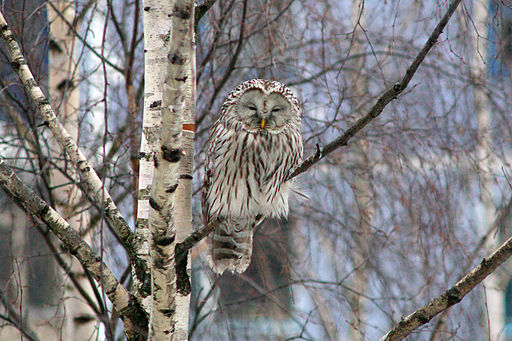 Look who moved into the neighborhood!  Simone woke a few weeks ago and spotted a large bird, “it looks like an owl, papa!”, hunting outside our window.  Ulli and I grabbed our binos to take a look through our bedroom window.  Sure enough we saw the owl perched on our fence pole overlooking our field.  It was a beautiful morning, snow falling slowly from a cloudy sky, but with the snow reflecting the light the view was crystal clear, almost bright for a winter’s day.  I ran for the bird book to take a look.  A diurnal owl should be pretty easy to identify considering not many owls are hunting during the daylight.  This bird was rather big with long tail feathers and a bright yellow beak.  It was really white with dark streaks on its breast and not much for color on the face.  Just grey with that typical heart-shaped satellite disc taking in waves and adjusting to life accordingly.  After watching and consulting the bird bible we concluded that we were watching a Habichtskauz.  I looked it up on the internet and found a website of an organisation in Austria that is dedicated to the reintroduction of the Habichtskauz in Austria.  Reintroduction, that must mean that there aren’t many in Austria.  I read further to learn that they have been thought to be extinct in Austria for the past 50 years — only being seen on a few occasions.  The organization is breeding these owls and have yet to release the young into the wild.  The director of the organization is an ornithologist who works at the University of Vienna; Dr. Richard Zink.  I gave Dr. Zink a call to let him know what we have seen.  He seemed  interested and sent a Biologist from our local National Park office.  We live in a National Park, which is obviously different from the big wilderness NP’s in America.  The Southern Styrian Wineland Nature Park is part of a series of 45 nature parks in Austria which are responsible for preserving the cultural and ecological landscape of this region.  So, Andrea Bund, a local biologist who works for the National Park came with a very large camera and wanted to go out and take pictures of the owl.  But the owl is only hunting the field in the morning.  We went for a walk, looking at the forest and talking about the owl.  It is not easy to find an owl in the forest so Andrea decides to leave her camera with us for the weekend and asks us to take a picture.  Now we have someones personal camera with a telescoping lens, two kids, 10 chickens, 5 sheep and an owl in the forest.  Morning came and I saw the owl hunting outside the window.  I opened the window to take a picture but the snow crust cracks as I open it and the owl flies away.  The next morning I try a different approach.  The owl was hunting.  I left the house through the front door (the other side of the house from the perspective of the owl), walked quietly around the house, down through a sunken path in the forest that used to be the old road for who knows how long.  I crawled up the bank of the path through the snow to get a look from the edge of the forest to the field where the owl was hunting.  All this with Andrea’s personal camera.  As I crest the bank to see the owl — nothings there.  The owl has disappeared.  How can they do that so quietly?  One moment there and the next moment gone.   The owl is like an empty boat; so much presence without even being here.  This is what makes relationships with owls so interesting.  I once had a nonreleasable Barn Owl that we kept in an aviary and taught children about owls and adaptations.  When the owl first came to us she was not trained to live in cages with humans.  It was my job to train her.  The first task in training an owl is to train them to eat the food you give them and then to have them fly to you arm to get the food (mice).  The Barn Owl, named Tyto, taught me a lot about how to work with owls and about myself.  She sensed my fear to be in the cage with her.  She knew that I was tired and had other concerns on my mind.  She would not fly to my hand to take the mice until I met her on her terms.  I was told to take a blanket and cover my head, sit down and put my arm out with the mice in my leather grove.  All of this at nighttime.  So, I tried it and after a moment of sitting the owl flew to my glove and took the mouse.  Magic.  No eyes no fear.

So the next morning came.  We need to get a picture because Andrea is coming the next day to retrieve her camera and now we are concerned that they aren’t going to believe us that this is a Ural Owl because we can’t get a picture.  The night before I cracked the window so it would be ready to open quietly in the morning.  Morning.  The owl was hunting.  The window was slightly open and Ulli hops up in the window with the camera and sticks her body out onto the roof.  She took many pictures but they were far away and the light is wrong.  But we have evidence.  Andrea comes the next morning and we look at the photos.  She thinks it is a Waldkauz, a different species of owl that is more common, due to its darkness in color.  We send it to Dr. Zink for further inspection.  We didnt hear from anyone for a few days.  The owl is still hunting and we can hear a pair calling in the forest at night-time.  We identify the call as a Ural owl.  Ulli receives a call from Andrea Bund, the biologist, that it is confirmed that the owl on our property is a Ural Owl.  One of the few in Austria!  It is such an honor to be able to live on a piece of land where the Ural owl finds its home.  I hope that he or she will stay and raise a family.  We can take care of each other — we will try not to disturb the land as much as we can and he will eat our mice and gophers.  True Harmonic Convergernce.